It was an epic return to the race course for Highland Fling last week at the Maxi Yacht Rolex Cup… a drama filled five days ending in an overall class win!

Steve Branagh was on board delivering a thrilling running commentary…

‘’After 2 years away from the race course the first race went surprisingly well.
We started in a building breeze and beat up through bomb alley before setting the kite and ripping around the top of the island back to the famous Monachi rocks.
We rounded the rocks and fetched into the bay where we gybe set onto the A4 and headed back out through the cut where the wind shut down and switched through 180 degrees. Here the race turned inside out for many with a lot of boats getting stuck in the hole while others sailed around them and on to the finish line.
We finally got through the transition however the time lost meant that we finished second on handicap to the very well sailed Rambler 88… 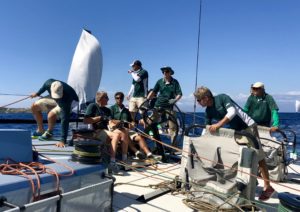 ‘’Race 2 was sailed in lighter conditions with yet another breeze change although this time we were not as effected as the classes ahead.
The course was around 30miles with plenty of marks and islands to go around. The emphasis was on crew work as there were a lot of sail changes; and in the shifty breeze.
On Fling we stayed in touch with Leopard the whole way round and were not too far behind the much higher rated Rambler 88. This gave us a comfortable handicap win and the lead in the overall class standings.

”Going into the next day of racing we were in a great position. Day 3 was raced in a very choppy sea state and a dying breeze.
The race committee sent the fleet beating up to the Monachi rocks before a downwind leg into “Bomb Alley” then a beat out to Hotel mark; an island on the northern end of Sardinia.
We rounded the rock and had a tight reach back to Monachi with a furling A3 then J1 jib before setting the A2 kite down to the final turning mark followed by a short beat to the finish.
On Fling we managed to stay in touch with both Leopard and Rambler 88 until the top of the island and saved enough time to take another 1st place on handicap.

In the evening we had a small memorial service in the harbour to say good bye to our old mate Tom Hutchinson. Tom founded Future Fibres in the mid 90’s and sadly passed away very recently in a kite boarding accident… RIP Tom, we all miss you mate.” 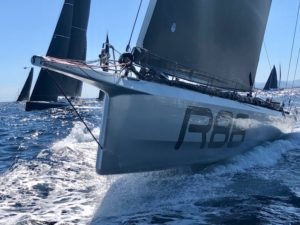 After lay day the wind decided to turn the tables and come back with some real free. With one broken mast and damaged boats and crew, Day 4 will definitely be remembered by the owners and crews competing in the Rolex Maxi Worlds for some time…

”The forecast for the day had us sailing in around 20 knots however by the time we started racing we had a consistent 25 knots with gusts to 30+ that were causing crew anxiety levels to spike and owners blood pressures to rise.

The first beat for most crews was a delicate balance between boat speed and the need to get the boat around the course, however once at the top mark and having negotiated the bear away manoeuvre in 30 knots of wind it became a wild ride down to Monachi rocks.
On Fling we sat between 20 and 23 knots for most of this leg with spray from the bow hitting the crew on the rail like a fire hose. We gybed around the rocks in 30 knots with the two Wally 77’s that had started earlier.
During the right hand turn we sustained a small tear to the leach of our mainsail that then continued to grow as we again headed at high speed down the reach to the next mark of the course. After 20 minutes of nursing the mainsail and watching the tear increase in length it was decided that the main would come down as we rounded the island mark at the start of the next beat.
Any sail handling at high speed on these large boats has to be thought through and planned before it starts but you can never take into account Murphy’s law that inevitably comes into play just when you think its all going well… For us the mainsail came off the lock and started to come down then the head board car got stuck at the first reef lock 3 meters from the mast head. With the mainsail ragging and the tear getting longer by the second the bowman was sent up to cut the webbing strops on the head of the sail and finally it was dragged down and secured to the boom. At this point it became all about finishing the race so we carried on around the rest of the course with just the J4 jib up still averaging 12 knots.
Once back on the dock there was the usual mad rush for crews to get damaged sails off to the sail makers for overnight repairs while others surveyed the various broken pieces of hardware and told the stories of the days hard fought battles.

With Rambler 88 taking a first today we now have to win tomorrow and hope they take a 3rd or 4th.” 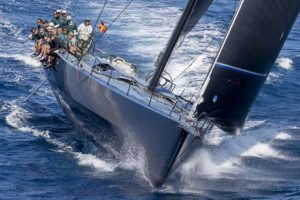 But it wasn’t over… Day 5, the final race to the finish!

”The last day of the regatta arrived with a lighter forecast of 10 to 15 knots which seemed very quiet after the previous days conditions.

On Fling the pressure was on, we had to win the race and put a boat between us an Rambler 88 to take the overall trophy. The great conditions allowed the race committee to set us a long beat north around the outside of the islands followed by a reach then run back down through “Bomb Alley” to the finish. This was a course that suited us a little more than Rambler and with some great crew work coupled with good calls from the tactician and navigator we were able to take the race and much to the owners delight the overall win.

Celebrations all round for a great race won!”