This years Loro Piana Superyacht Regatta was one of the most challenging yet. With all possible conditions thrown into four days of extreme superyacht sailing, and one of the most competitive fleets ever seen at this regatta, Steve Branagh gives a dramatic account of the regatta from on board the newest addition to the fleet, the mighty, 46m Vitters built, S/Y Unfurled. 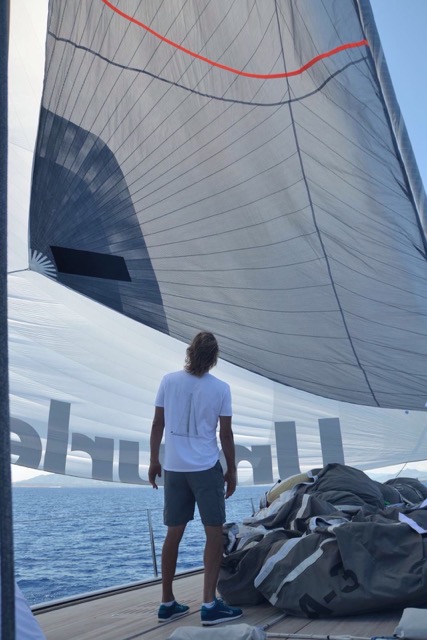 ‘’Race 1 was sailed in 16/18kts with a beat up through bomb alley meaning the bigger boats had to make their way through the smaller boats that started earlier. On Unfurled we had a captive winch issue that resulted in us having to sail back through the fleet again on the run back down through bomb alley. We passed Ganesha and were 100mts behind Saudade when the breeze switched from a spinnaker run to a dead beat in 10 seconds meaning the spinnaker folded itself around either side of the mast before finally exploding into a number of shredded pieces of cloth. The final 2 miles to the finish was in full clean up mode trying to get the sails under control and stay ahead of a late charge from Ganesha who had seen the carnage on out boat and had time to get their sail change carried out. With no room at the final mark they had no choice but to follow us around and finish behind us. Saudade took the win and we placed second. 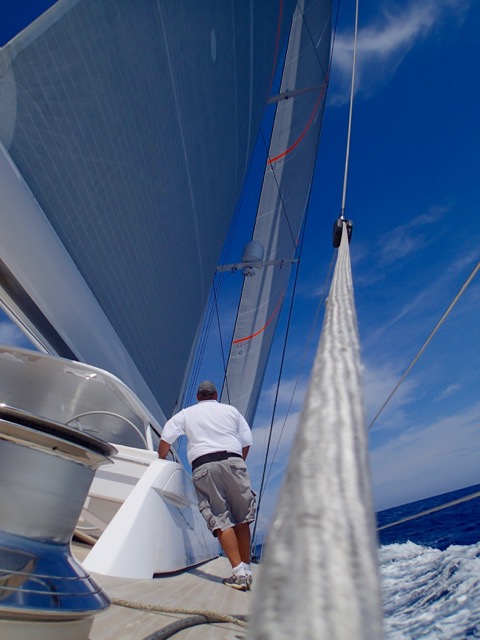 Race 2 was forecast to have strong winds but at the start was still light giving crews the headache of whether to believe the forecast and change the headsail to a smaller jib or hope that it didn’t get too windy on the beat up through the islands. On Unfurled we chose to stick with the large jib and ended up completely overpowered in 26/27 knots of wind and wishing we had changed out when the opportunity was there. Having completed the beat, the course took the fleet around the outside of the islands on a run, passing outside of the famous rock outcrop of Monachi, before heading to the leeward mark in Pevero bay and a short beat to the finish off the entrance to Porto Cervo. Yet again the sea breeze from the South played havoc with the leaders and, as per Race 1, we went from a run to upwind mode in the space of just a couple of minutes… although this time we were ready for the manoeuvre and completed it with no dramas. With the two opposing winds fighting each other the race became another lottery forcing the race committee to shorten the course due to the dying breeze. Unfortunately the Wally fleet who were meant to sail windward leeward races that day were sat in the hole all day and didn’t get a single race in which made for a pretty unhappy bunch of sailors! 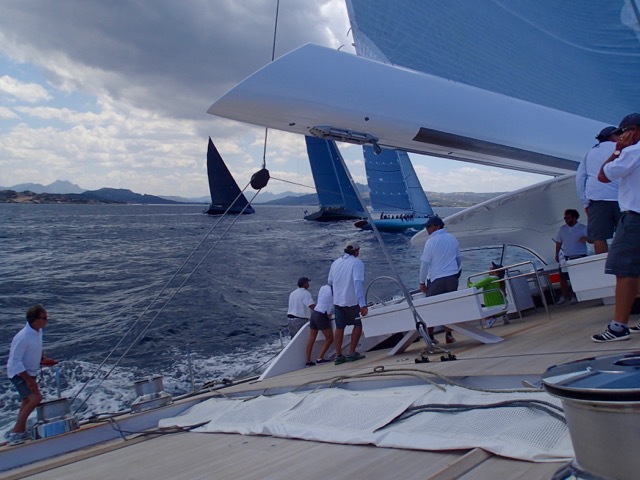 Races 3 & 4 were sailed in light conditions (4 to 10 knots) that we had not experienced previously. This meant that we were learning how to get the boat moving out of the tacks and gybes; working out what angles worked for speed building and how to gybe the 1600 square meter spinnaker without losing to much speed. In the hot frustrating conditions we slowly slid down the leader board as the lighter smaller boats came to the fore. By the end of the last race we had dropped to 4th overall behind Saudade, Win Win and Seawave however although we didn’t come away with the result we would have liked we have learnt a lot more about boat handling and now look forward to taking part in the Palma Super Yacht Cup.’’