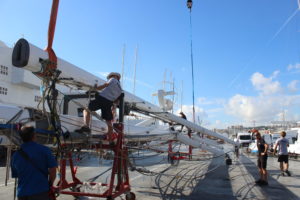 It has been an extraordinary month for RSB Rigging Solutions and in the last two weeks they have stepped or un-stepped over ten superyacht rigs including those of: Royal Huisman built S/Y Kamaxitha, ex-Atlantic crossing record holder S/Y Mari Cha III, and Nautor’s Swan S/Y Valkyrie. Founder of RSB Rigging, Steve Branagh, comments on what it takes to become one of the most sought after rigging teams in the world;

‘’Over the last few years, RSB RigPro has grown to become the largest and one of the most renowned super yacht rigging companies in the world. We now have a full team of 23 members including highly experienced and qualified riggers, talented sailors, splicing and rope experts, qualified LEEA inspectors, and operational staff. This amazing team and the ongoing close relationship with Southern Spars allows us to continue to offer the best service to our customers and has contributed to this continued growth and success.
I am incredibly proud of the team. In the last two weeks they have stepped and unstepped over ten super yacht rigs and removed countless forestays and furler units requiring the use of all 86 mast cars we currently have in the STP Shipyard and even forcing us to become creative with the way the Mari Cha 3 masts were placed into the high load cars!“