RSB Steve has just finished the St Barths Bucket on board Vitters Shipyard built S/Y Unfurled. Steve talks us through the challenges the team faced on this newly launched superyacht, and how they overcame them to take the win at one of the most prestigious superyacht regattas on the planet…

‘Race 2 was harder with a few more corners that put a premium on boat handling which we are still working hard to master. With all the boats arriving at the bottom mark within a few minutes of each other it was a re run of the beat to the finish from Race 1 however this time we didn’t quite get this right and crossed the line in 4th just behind Nilaya, Hetairos and Visione; not bad for a big cruising boat in the racing class! With the last race being a clockwise round the island lap and the points very close today is make or break! Final day and all to play for! ‘What a day! Race 3 was a winner take all event with 4 boats capable of taking the class win and plenty of opportunities for disappointment.’ 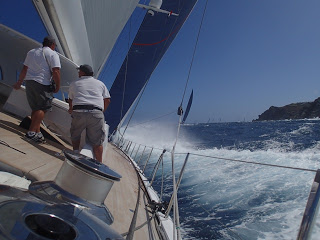 In a gusty 18 to 20 knots of wind the race committee set a round the island course giving us a down wind start followed by a long beat around the north of the island with a run to the finish. The first down wind leg saw us carrying the 1900 square meter spinnaker to the rocks on the western side of the island where after a frantic couple of minutes of sail handling we settled in for a long beat along the northern coast.

Yet again we slowly caught up to Inoui and Nilaya while being chased down by the faster Visione and Hetairos. At the eastern end of the island we rounded the rocks less than a boat length ahead of Nilaya and set every square meter of sail we had to fend them off and protect our lead. Nilaya had a problem with the spinnaker and were chased down by Visione who crossed the line second behind us with Nilaya in third.

Tonight was a big event for the owners of Unfurled as not only did we win our class against all the race boats that are much lighter than us we also took the overall win of the St Barths Bucket which says a huge amount for the owners, management, builders, supplier, permanent crew and the skill of the rest of the team who took a new boat launched in November and won this prestigious regatta straight out of the box.

Congratulations to everyone involved in this project; you should all be very proud!