RSB Rigging Solutions was contracted last year to supply the running rigging package on yet another of the most prestigious sailing yacht projects of 2015: 46m Vitters Shipyard built S/Y Unfurled. The brand new 46m S/Y Unfurled was launched last year from the renowned Vitters Shipyard in Holland. She is the newest in a long line of yachts with the name “Unfurled” and replaces the 34m Royal Huisman built yacht, that was recently sold and is now called S/Y Spiip.

Allan Wester heads up the RSB Rigging Solutions splicing department, he states: ‘This was the 2nd highly prestigious project of 2015 for which we provided a full running rigging. Being a relatively small splicing team, we are incredibly proud of our growing resume. This goes to show the level of expertise for which we are now becoming known in the industry.’

Steve Branagh, founder of RSB Rigging Solutions, has recently returned from S/Y Unfurled’s debut appearance in the Caribbean, and shall be competing with them in their first ever regatta, Loro Piana Caribbean Regatta and Rendezvous which begins on the 9th March, followed by the St Barths Bucket.

Steve comments, ‘The new Frers designed Unfurled has been an amazing project for RSB to be involved with. Having supplied all the running rigging and lock strops to the boat, it has been great to sail on-board in Antigua. As the boat was delayed into Antigua due to the shocking European winter weather that made the Atlantic crossing a game of cat and mouse with the storm systems we were unable to take part in the Antigua Super Yacht Challenge. However, we spent a very productive week putting the boat through her paces, checking that the full wardrobe of Norths 3Di sails fit and go up and down as they should, whilst also starting the data logging processes that are so critical with these large super yacht projects.

She is a very powerful boat with a huge amount of sail carried on the 63m tall mast. The mainsail is a square topped sail made of Norths 3Di cloth and combined with the full size blade jib gives us around 1200 square meters of upwind sail area. Off the wind with the mainsail, A4 spinnaker and spinnaker staysail set we carry a shade under 3000 square meters of sail meaning that boat handling and crew work is at a premium to keep the boat under control and going in the right direction. In the trade winds off Antigua we spent plenty of time working at upwind angles and speed followed by long downwind sessions with plenty of gybes and manoeuvres and came away very impressed with the boat speed and how easy she is to drive. 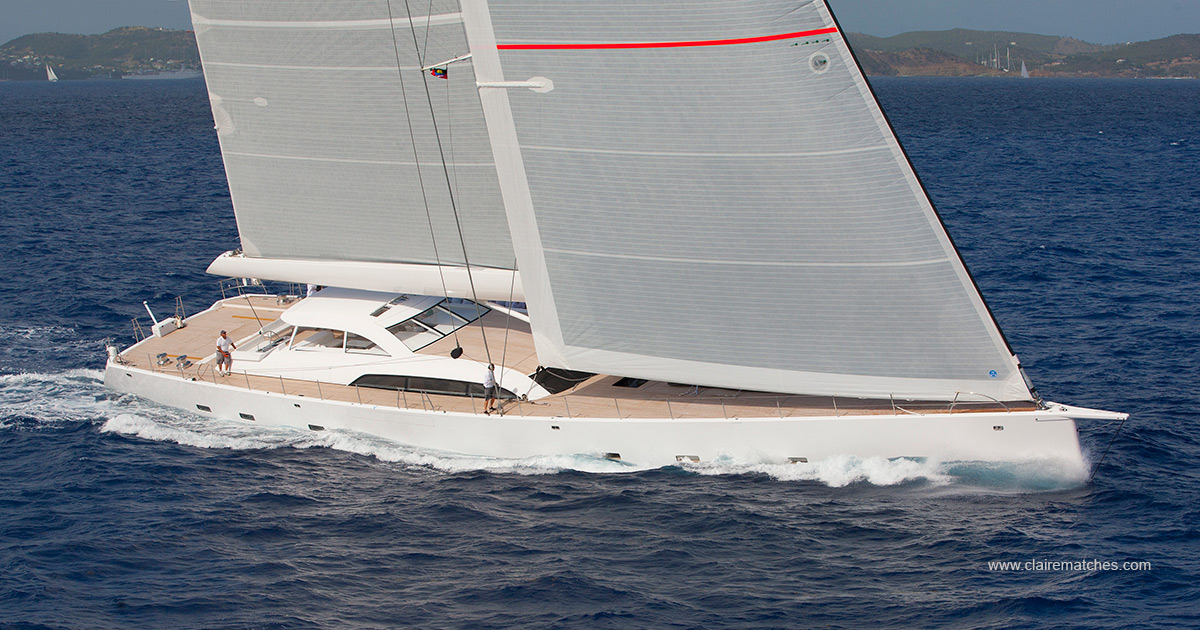 The onboard crew and race team have gelled together well with many of us having sailed together on various other projects. We realise that it will take some time to learn the best methods of handling these huge sails and getting the boat around the corners on the race course but have high hopes for this years regattas in the BVI’s, St Barths, Sardina and finally the Super Yacht Cup in Palma de Mallorca.’S/Y Unfurled is also a finalist at the World Superyacht Awards for Sailing Yachts 45m and above. We wish the owner and Unfurled team the best of luck for all her appearances this year.For all ropes and rigging enquiries contact splicing@rsb-rigging.com